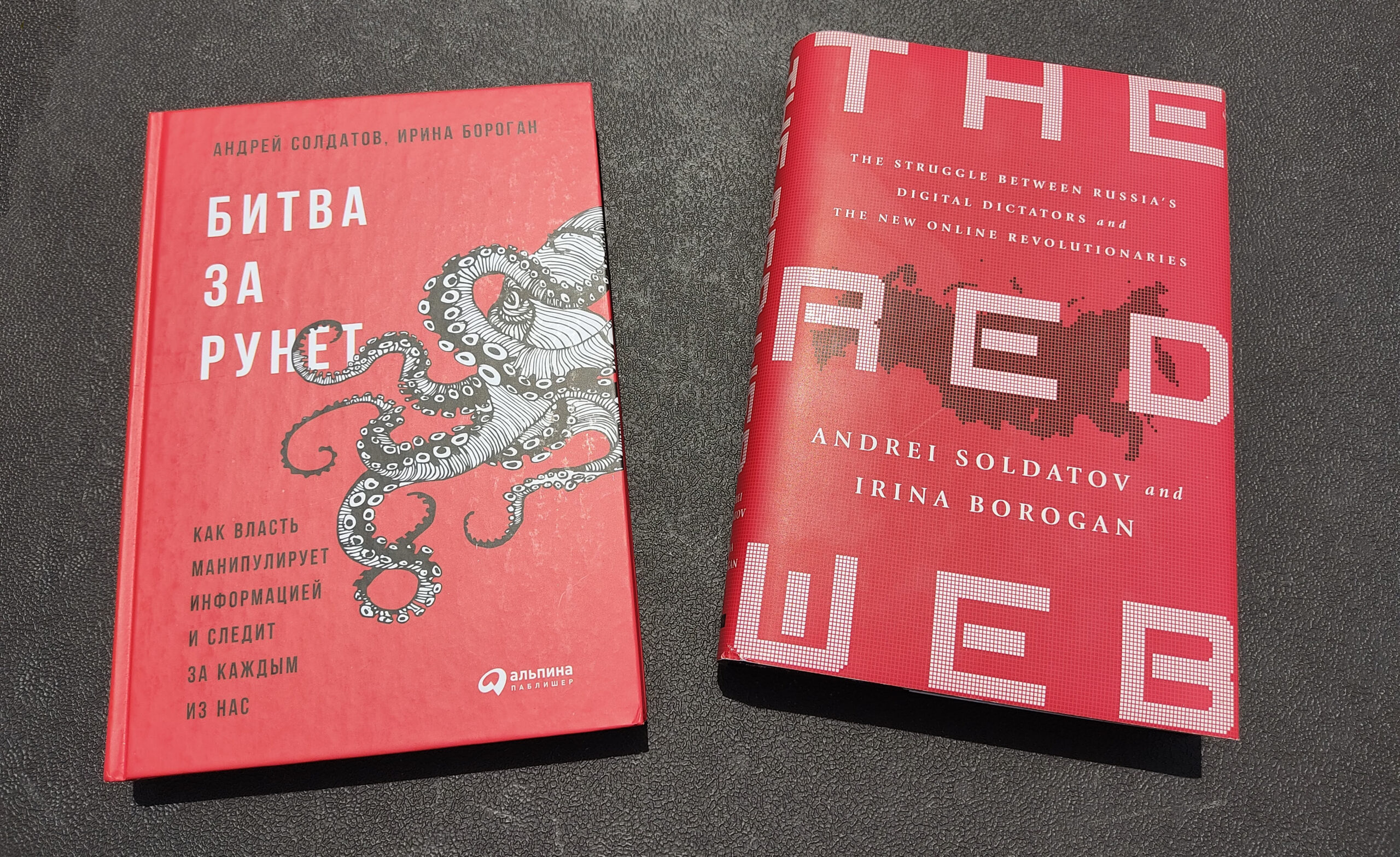 The Red Web: The Struggle Between Russia’s Digital Dictators and the New Online Revolutionaries is a nonfiction book written by two Russian journalists, Andrei Soldatov and Irina Borogan. The authors examine the history of surveillance technologies in Russia, from the very early years of the telecommunication industry to the era of social media. The book was originally written in English. Its Russian version, Битва за рунет, was published about one year after the English original hit the bookshelves and got wide recognition. The sensitive nature of the subject probably explains that gap. Funny, but when I wanted to get a digital Russian copy of the book, it was “out of stock” in one of the largest Russian online book stores.

The Red Web is a documented chronicle of political life in Russia during the past three decades shown from the perspectives of the telecommunication industry. Andrey Soldatov and Irina Borogan tell the story of how the Internet came to Russia in the 1990s, became a very powerful medium in the 2000s, and then turned into one of the instruments of state control.

In order to explain that dynamic, the authors had to start the story in the 1950s, when telecommunication technologies were at their early stage. It wouldn’t be an exaggeration to say that intercepting phone calls and eavesdropping has been in the usual repertoire of the secret police from the very beginning of telephonisation. They changed their names from NKVD to KGB, to FSB, but one thing has remained invariable: the desire to have a control over the means of communication. So, Soldatov and Borogan take the reader on a brief tour  of the history to show how persistent that trend is.

The chapters of the book dedicated to Soviet history are anything but boring. It is not a secret that the competition between the United States and the Soviet Union drove technological development in both countries. While the space race attracted a lot of public attention, the competition in the telecom business remained almost unnoticed; however, there were events as dramatic as the moon landing. Along with telecommunications, surveillance technologies were rapidly perfected. Telecommunications were designed to unite people, to help people build connections. The Soviet state demanded telecommunications to be the means of control. That existential conflict shaped the industry in Russia, with the political pendulum swinging from authoritarianism to relative liberalism and back.

I read the chapters about Perestroika and the 1990s with a bitter-sweet nostalgia. After the collapse of the Soviet Union, the political and economic turmoil opened limitless opportunities, but most people felt absolutely helpless and lost, and were too confused to see and take those opportunities.

Back then, the internet was in its embryonic stage in Russia, but those were the telecommunications that helped Yeltsin to win a confrontation with the coup leaders in 1991. The horizontal, decentralized network turned out to be much stronger and more efficient than anyone could expect.

A fairly large part of the book tells a story of Russian TV, the technology that largely preceded the Internet as mass media. Before the boom of the Internet, there was a boom of TV in Russia. Western movies and TV shows flooded the country, and the first ad videos shocked the unprepared Russian audience. The first political shows promoted open discussions, even though those shows were broadcasted after midnight. Within just a few years, TV became very powerful, but power can be corruptive. TV became a means of mass manipulation, even though some of the TV managers had good intentions. The “magic comb”, as one of the humorist writers called TV, could make an unnoticeable, rather unattractive and unimpressive person a public hero in no time. And, basically, that is what happened in 2000.

It all started with Putin’s government establishing full control over TV. I was old enough to remember the seizure of a popular TV channel, NTV, that was known for criticizing the new Russia’s president Vladimir Putin, but Soldatov and Borogan reminded me of the little details that I forgot. Those details clearly connected the events that happened 20 years ago with the ones that are happening in Russia now, when people get arrested for reblogging someone else’s posts.

When TV became state-controlled as it was in the Soviet Union, the Internet was already available and relatively affordable in Russia’s cities and towns. Public discussions moved to blogs and social media, and at first, the government didn’t know what to do with that. Pretty soon, technical solutions for intercepting and filtering online traffic were found and successfully implemented nation-wide.

A detailed description of how the Russian government learned to control the Internet, censor its content and manipulate public opinion online makes up about two thirds of the book. In the post-Snowden era, one cannot resist the question, “how is that different from what other governments do to their citizens?” Maybe, it is not much different, but if you want to learn how and why things like that happen, and how they become technically possible, you may find some answers in The Red Web.

I bought the English copy of the book soon after it was published, but it took me a few years to start reading it. A few years may seem like a short period of time, but since then, Russia has changed a lot. What Soldatov and Borogan defined as trends in their book, became mainstream. What the journalists depicted as examples of state pressure looks relatively benign today.

I read about the hopes that many progressive journalists and bloggers pinned on Dmitry Medvedev (he liked gadgets and flirted with the IT leaders back then) and couldn’t believe how naive those people were. I read about how the opposition organized and coordinated powerful protest movements in Russia using Facebook, and remembered the names of those who got arrested and got real time for participating in those protest marches. Some of those people later died behind bars. I read about US-based social media resisting the orders to store personal data of Russian users in Russia, so that FSB could have full access any time, and laughed, because eventually all the IT giants gave up and obeyed the orders.

Yet, the book gives hope. Technologies are nothing but tools. They can be used for good, and for bad. The Internet, the network with horizontal connections, can become instrumental in the fight for civil rights and freedom. Though the book is focused on Russia, the problem of state intrusion, omnipresent surveillance and censorship is not uniquely Russian. The Red Web is a great reminder that cardinal changes in society often happen unnoticed. It all starts with small concessions. We must not allow ourselves to become complacent, and we should never give up our freedom.