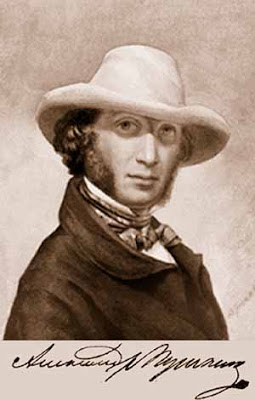 Outside Russia, Russian literature is associated with names of Tolstoy and Dostoevsky. No doubt, these writers deserve to represent Russia in the global culture. But if you ask any Russian whom he or she thinks about when talking about classic Russian literature, you’ll most probably get the answer “Pushkin”. During last two centuries, Alexander Pushkin has remained extremely popular and beloved by Russian readers. Even now, with youngsters reading less and less, Pushkin’s tales and poems are known literally by everyone.

A Russian reader lives with Pushkin’s poems and proses all his or her life. In early childhood, our parents read us Pushkin’s tales. I don’t know anybody who hasn’t heard about The Tale of the Fisherman and the Fish. At the age of 13 or 14, we read “Eugene Onegin”, noticing mostly the love story and skipping the brilliant description of the Russian high-society life. When we grow older and become smarter, we re-read Pushkin’s historical novels, and every time we read them, we wonder how could he knew so much about the Russian mentality at the epoch, when the word “mentality” was unknown, and how could he articulate it so accurately. Quotes from Pushkin’s poems run through our everyday life. It seems that during his short life (he died at 37) he had thought about and felt everything that a man could.

Due to Pushkin, Russia had a literary boom in the 19th century. Before Pushkin, the written Russian language differed much from the spoken one. The written language was considered to be more “privileged”, so it was very conservative with tons of outdated words and ridiculous syntax. On the contrary, the spoken language was more flexible and lively, but it was considered as the “low” language. In fact, reading Russian writers of the pre-Pushkin epoch is torture. The word “ponderous” fits that literature best. Pushkin made a linguistic revolution in Russia. His poems were like natural speech. When you read it aloud, they sound like you just talk in rhymes. It was a real cultural rebel, and many of Pushkin’s contemporaries hated him for that. However, we don’t remember the names of those who refused Pushkin’s inventions, their fiction was swept away. Nobody after Pushkin returned to the old school writing, and the boom of the Russian literature was possible only because Pushkin prepared the language to be used for creative writing.

It happened so, that Pushkin was surrounded by brilliant writers. They were, probably, the most unlucky writers in the world and the happiest ones. They were talented, but Pushkin was a genius, so their poems and novels are undeservedly forgotten. They knew that the star of Pushkin would eclipse their names. And they appreciated it and helped Pushkin to re-arrange the Russian language. They supported his experiments with the language, so it was their contribution to our culture.

To those who are studying Russian literature and Russian culture, I would suggest to read at least the key Pushkin writings. They are the following:

Happy reading to everyone and happy 212th birthday to Alexander Pushkin!